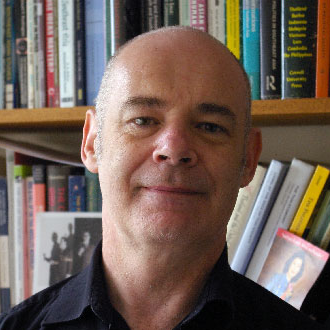 Although he is best known for his agenda-setting contributions to current debates on the politics of Thailand, his work is centrally concerned with the nature of power. How do entrenched elites seek to retain power in the face of challenges from new political forces? How do challengers to state power try to undermine the legitimacy of existing regimes? These interests have led him to study questions relating to the elections, protest rallies, uses of media, sub-national conflicts, and the politics of justice, among other issues.

He has spent several years in Thailand, has lived in Singapore, taught in Cambodia and Japan, and published on Indonesia and Vietnam. Time magazine wrote of his work, “No armchairs for this author… McCargo is the real McCoy.” Foreign Affairs cited his Pacific Review 2005 article “Network monarchy and legitimacy crises in Thailand” as a must-read primer on the country’s politics. Dr. McCargo’s ninth book, Tearing Apart the Land: Islam and Legitimacy in Southern Thailand (Cornell University Press 2008) won the Asia Society’s inaugural Bernard Schwartz Book Prize for 2009. He held a Leverhulme Trust Major Research Fellowship to work on politics and justice in Thailand (2011-14). Dr. McCargo appears regularly on BBC radio and television and has written for Daily Telegraph, Financial Times, Guardian, New York Times and Time magazine.

Dr McCargo teaches every Spring semester at Columbia University. During 2015-16, he was a resident Visitor in the School of Social Science at the Institute for Advanced Study, Princeton. He is the elected President (2013-17) of the European Association for Southeast Asian Studies (EuroSEAS), the world’s largest organization for the academic study of the region. Dr McCargo is a co-founder of the New York Southeast Asia Network (NYSEAN), a nonprofit initiative based at Weatherhead and funded by the Luce Foundation; for more details, see www.nysean.org

WEAI’s Duncan McCargo is interviewed about Thailand’s politics in the Georgetown Journal of Asian Affairs. February 24, 2015

WEAI Senior Research Affiliate Duncan McCargo publishes an op-ed on the Thailand coup in The New York Times. May 29, 2014