Abe’s Gone…Is the LDP Next?

Co-sponsored by the Center on Japanese Economy and Business

Professor Curtis presented his third annual WEAI Special Lecture on contemporary Japanese politics to a standing room-only audience on September13, 2007. The theme of the lecture proved especially topical. Originally advertised as “Can Abe Survive…and Can the LDP Survive Abe?” the title was abruptly changed when Shinzō Abe announced his resignation as Prime Minister of Japan on September 12. Re-titled “Abe’s Gone . . . Is the LDP Next?” the lecture touched on Abe’s tenure as prime minister, his predecessor Junichirō Koizumi and the opposition Democratic Party of Japan. In addition, Professor Curtis spoke of the future of the Liberal Democratic Party and made predictions which, in the continuing aftermath of Abe’s resignation, have proved accurate, including the ascension of LDP lawmaker Yasuo Fukuda to Japan’s premiership. The lecture was attended by journalists representing American and international news organizations, as well as members of the Columbia and New York international affairs community.

The event was co-presented by the Columbia Business School’s Center on Japanese Economy and Business (CJEB) and was moderated by CJEB’s director Hugh T. Patrick. The WEAI would like to thank CJEB, Professor Patrick and Professor Curtis for their roles in making this an historic and thought-provoking event.

Gerald L. Curtis is a former director of the Weatherhead East Asian Institute. He is currently Burgess Professor of Political Science at Columbia University and serves concurrently as a Visiting Professor at Tokyo’s Waseda University. Professor Curtis is the author of numerous writings on Japanese politics, including the book The Logic of Japanese Politics, as well as a newspaper column that has appeared monthly in Japan’s Chunichi and Tokyo Shimbun since 1984. Professor Curtis is a member of the Trilateral Commission, the Council on Foreign Relations, and the board of directors of the US-Japan Foundation and also serves as advisor to numerous public and private organizations in the United States and Japan. In 2004 Professor Curtis was awarded the Order of the Rising Sun, Gold and Silver Star by the Emperor of Japan. 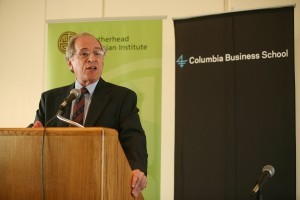 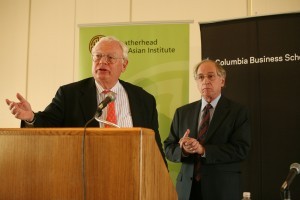