"Japan’s Historic Election: Cause and Consequence"

Japan’s Historic Election: Cause and Consequence

For the full video of the lecture, click here.

For a summary report of the lecture in English and Japanese, click here.

On September 24, 2009, or roughly one week into the Democratic Party of Japan’s new administration, Burgess Professor of Political Science Gerald Curtis spoke to an audience of 183 at the School for International and Public Affairs on the topic of “Japan’s Historic Election: Cause and Consequence.” He detailed the reasons behind the DPJ’s national victory over the long-ruling Liberal Democratic Party, and what Japan can expect from the new DPJ administration.

The DPJ ran on a platform of two main issues: a child allowance to help ease the population decline problem and the elimination of highway tolls. But Professor Curtis said it was not these issues—nor the DPJ itself, nor the possibility of Yukio Hatoyama becoming Prime Minister—that led to the DPJ’s win. Rather it was voters voicing a desire for change—and a deep dissatisfaction for the LDP.

The LDP, for its part, lost because its heretofore successful vote-gathering machine faltered. It could not deliver on the issues that the public, especially the rural public, wanted, which was not more roads, bridges, and dams, but more medical and nursing care and job training to prevent rural flight to the cities.

With this mandate for change, the new administration is working on dismantling 150 years of the way the government, the ruling party, and the bureaucracy have done business. Instead of giving bureaucrats prominent, powerful roles in government, the DPJ is shifting power back to the Prime Minister and elected officials.

It is also enacting 7 trillion yen in programs it promised in the campaign, such as the child allowance and the gradual elimination of highway tolls. Its overarching economic strategy for now, which is very different from that of past governments, is to put more money directly in the pockets of the public, in order to stimulate spending to help revive the economy.

In the foreign arena, the new administration will be working with an administration that is also relatively new in the U.S. Professor Curtis noted that the leaders of both countries have affinities in several non-military areas that should help make cooperation across the board possible, including thorny military issues.

How successful Prime Minister Hatoyama will be depends on how tough he is, how effective he is at consensus building, and how resistant he is to fierce pressures that are inevitably going to come—and are already coming—from vested interests against change.

Gerald L. Curtis is a former director of the Weatherhead East Asian Institute. He is currently Burgess Professor of Political Science at Columbia University and serves concurrently as a Visiting Professor at Tokyo’s Waseda University. Professor Curtis is the author of numerous writings on Japanese politics, including the book The Logic of Japanese Politics, as well as a newspaper column that has appeared monthly in Japan’s Chunichi and Tokyo Shimbun since 1984. Professor Curtis is a member of the Trilateral Commission, the Council on Foreign Relations, and the board of directors of the US-Japan Foundation and also serves as advisor to numerous public and private organizations in the United States and Japan. In 2004 Professor Curtis was awarded the Order of the Rising Sun, Gold and Silver Star by the Emperor of Japan. 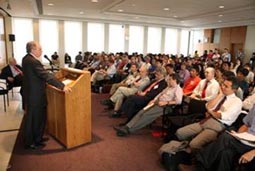 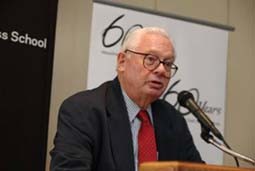