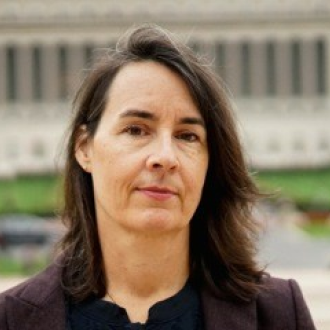 Meg McLagan is a filmmaker and anthropologist.  Imagination and persistence in the face of social forces outside one’s control are frequent themes in her work.  She recently finished co-directing Half Truths and Full Lies, a multichannel installation that depicts, through documentation and reenactment, the case of Efrén Paredes Jr. a Latinx man from Michigan, who was sentenced to life without parole in 1989 at age fifteen, for a murder he claims he did not commit.  The project aims to transgress and complicate the tension between fabrication and record, guilt and innocence, and accident and intent, and in so doing, to make tangible the actual lives, stories, legal structures and statistics that underlie the current state of youth serving life without parole sentences in the U.S.

Previous work includes the feature documentary, Lioness, which won the Center for Documentary Studies Filmmaker Award at Full Frame Film Festival and aired nationally on the PBS series Independent Lens in 2008.   Following its release, Lioness played an important role in Congressional passage of the Women Veterans Healthcare bill, signed into law in 2010, as well as in the Pentagon’s decision to open combat jobs to women.   Sony Television Pictures recently optioned the film for tv serialization.

Other work includes a collaborative multimedia project, Air Drifts, on global air pollution and scientific visualization, produced with NASA and an interdisciplinary team of architects, designers and scientists and exhibited at the 2016 Oslo Architecture Triennale; and Tibet in Exile, a half hour film broadcast on public television and screened at festivals and museums in the U.S. and Europe.   McLagan began her film career working as a producer on Paris is Burning, one of the most acclaimed examples of 1990s New Queer Cinema.

McLagan’s scholarly work examines the relationship between forms of politics and visual culture.   She has published on human rights, testimony and architectures of activism and is co-editor of Sensible Politics: The Visual Culture of Nongovernmental Activism, published by Zone Books in 2012.   Her doctoral research examines the centrality of media to the formation of the Tibet Movement among Tibetan refugees and supporters around the world.

Research items related to her doctoral work were recently part of Transcultural Tibet: Archival sources at Columbia University, an exhibition of archival and other rare materials at the C.V. Starr East Asian Library between March and June 2017.  The materials were drawn from the Starr library’s newly inaugurated Meg McLagan Collection: The Tibet Movement in Exile, 1989-2003.

McLagan is a recipient of grants and fellowships from the Sundance Institute, MacDowell Colony, National Endowment for the Humanities, Bunting Institute at Radcliffe College, Mellon Foundation, School of American Research, and the Wenner-Gren Foundation, among others.  She holds a doctorate in anthropology from New York University and B.A. in English from Yale.   She teaches in the Film Studies Program at Barnard College, Columbia University.