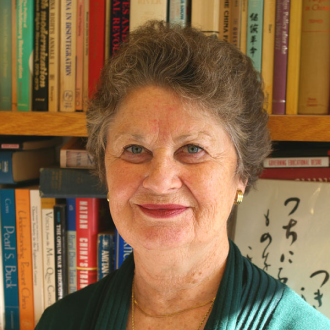 Education about East Asia in U.S. schools; education in China

Dr. Martin is director of the Asia for Educators program (AFE) at Columbia, which encompasses the East Asian Curriculum Project for precollege educators and the Columbia Project on Asia in the Core Curriculum for the undergraduate level. She is also one of the five founding directors of the National Consortium for Teaching about Asia (NCTA) and head of its Columbia Coordinating Site. Dr. Martin is an associate editor of Education about Asia, a publication of the Association for Asian Studies (AAS). She has chaired and served on a number of education committees of AAS and NEH, been a member of the advisory board of ASIANetwork, and a consultant to the New York City Board of Education, the New York State Department of Education, the National Council for History Standards, Annenberg/CPB, and several textbook publishers. Dr. Martin received her PhD in political science from Columbia University in 1977. She has taught at Columbia, Fordham, and Teachers College. In October 2015, the New York Conference on Asian Studies (NYCAS) named Dr. Martin the recipient of the Ronald G. Knapp Award for Distinguished Service to Asian Studies in New York State, “in recognition of her outstanding work as the founder of the Asia for Educators program and many other initiatives to promote the study of Asia in New York state and beyond.” She is also the recipient of the Franklin Buchanan Prize 2000 for outstanding curriculum publications for all educational levels, awarded by the Association for Asian Studies and its Committee on Teaching about Asia.