Being the only higher education institution with a dedicated program in modern Tibetan studies has its advantages.

“All the speakers that we have brought in—it’s really been amazing,” said Gray Tuttle, Leila Hadley Luce Professor of Modern Tibet Studies in the Department of East Asian Languages and Cultures. “There’s just no place else that they could speak.”

Tibetan studies has long been dominated by a focus on religion, and had historically been grouped with South Asian studies, Tuttle explained. Columbia’s program is unique in that it is equipped  with a plethora of resources to attract scholars of contemporary Tibet. “Creating the space where that can happen, I think, is really significant,” Tuttle said, noting also Columbia’s proximity to important institutions like the Rubin Museum and Latse, and New York’s active local Tibetan community.

These benefits have helped to solidify the niche Columbia’s Modern Tibetan Studies program has carved out. The result has been a busy program of vibrant events, ranging from a packed  conference this month cohosted with the Rubin Museum that brought together Tibetan art from collections around the world, to talks with prominent Tibetan figures in film and literature,
to more traditional archives- and research-based lectures on modern Tibetan history.

“Just seeing the scholarship that’s going on in Tibet—the Tibetan scholars and other individuals who come here—there’s so much going on,” said Eveline Washul, a postdoctoral research fellow at WEAI who has been named the new director of Modern Tibetan Studies, to begin this summer. “A lot of people want to come here so it’s been amazing just to host them and be able to have this exchange,” she said.

When the Modern Tibetan Studies program was established at the East Asian Institute 20 years ago, the world’s knowledge about Tibet was somewhat limited. “It seems like in the ‘80s and ‘90s when Tibet was coming more into the media, a lot of people in the US didn’t really know what Tibet was,” said Washul. “Now we’re taking it to the next level and breaking down stereotypes and imaginings about Tibet through our scholarship and teaching.”

“Tibetan autonomous areas—even recognized by the Chinese state—are one-quarter of Chinese territory,” Tuttle said. He explained, further, that the study of contemporary Tibet is both timely and important because of the geopolitical significance of China’s dealings with Tibet, and environmental concerns about the impact of climate change.

Despite declining media attention, the field of Tibetan studies itself has expanded, and the Modern Tibetan Studies program has attracted an increasingly diverse group of students and faculty. Notably, the number of students from Asia, particularly China, has grown significantly.

There is also more diversity in terms of discipline, Washul explained. “Now we have more people being trained in different disciplines like anthropology, geography, and environmental studies, education, literature, and more.”

“Increasingly now, and more so in the future—in the age of the internet and social media and more global processes— Tibetan studies scholarship is beginning to look at Tibet as interconnected with all of these global communications and trends,” Washul noted.

As that happens, the Modern Tibetan Studies program will continue to strengthen the foundations it has made, building on the resources it has accumulated through its unique position at the Weatherhead East Asian Institute. 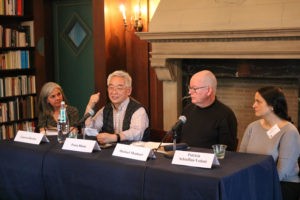 Panelists at a Tibetan literature in translation event in April 2019 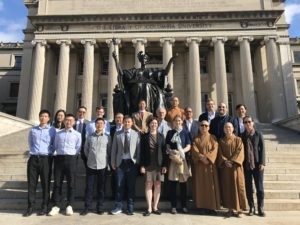 “Myriad Teachings with One Nature: Buddhism in China and Inner Asia” event participants in front of Columbia’s Low Library in October 2018 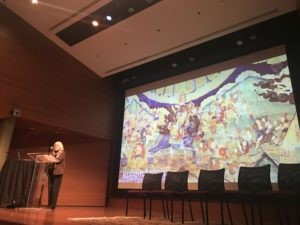 “Tibetan Buddhism and Political Power in the Courts at Asia,” at the Rubin Museum in New York, cosponsored by WEAI

This article originally appeared in the April issue of the WEAI 70 Years newsletter.

The following events were held throughout 2019 as part of the Modern Tibetan Studies at 20 series:

March 11 – “A Note from Japan on Contemporary Tibet: The CCP’s Religious Policies and the Emergence of Religious Space in Eastern Tibet”

May 1 – “Yangchuk Tso in Conversation: Contemporary Cinema and Pop Music in Tibet”

September 30 – “Tibetan Studies in Europe: From Philology to Social History (in between and from below)”