Nationalism and Populism Around the World: Is Japan an Exception?

All across the globe, populist movements appear to be gaining momentum. Whether aligned with the left or the right, espousing views of anti-elitism or xenophobia, these populist movements and their leaders threaten the status quo. At a two-part event on February 10 at Columbia University titled “Nationalism and Populism Around the World: Is Japan an Exception?” scholars examined the growth of this phenomenon before focusing on the particular case of Japan—which appears to have largely resisted populism’s lure.

During the morning session, Columbia Professors Nadia Urbinati (Political Science), Mark Lilla (Humanities), and Jack Snyder (Political Science) discussed definitions of populism and the manifestation of nationalism in Europe and the Americas on a panel moderated by Columbia Journalism School Professor Alexander Stille.

According to Professor Urbinati, populist movements are anti-establishmentarian in nature, fueled by the belief that power corrupts and only an outsider can lead responsibly. These movements are led by an individual that claims to “embody the people.” She also noted that the political parties they form are “liquid,” lacking structural organization and limits.

On the possible causes for populism’s rise, Professor Snyder suggested that a number of triggers—xenophobia and nationalism; globalization and automation; corruption and increasing inequality—have contributed to a feeling among many that Liberalism has failed.

Professor Lilla added a psychosocial analysis to the discussion, suggesting that populism arises from the desire to rein in these rapid changes—the “liquidity” of our current institutions and social norms. He suggested that some of these causes of populism, like xenophobia, are actually manufactured in part by the populists themselves: Out of the urge to control a changing world, “amorphous discontent is offered a narrative,” such as the idea in the US that immigrants are taking away jobs from American citizens, Lilla explained.

In the afternoon, the discussion shifted to the question of why populism has made so few gains in Japan. According to Professor Satoshi Machidori of Kyoto University’s Graduate School of Law, part of the explanation lies in Japan’s political structure, which is structured in a way that makes it difficult for a populist to take over the ruling Liberal Democratic Party (LDP). He noted that there have been some populist leaders at the local level, including Osaka mayor and governor Toru Hashimoto, and Nagoya mayor Takashi Kawamura, but added that they have yet to break into national politics.

Kiyoteru Tsutsui, Professor of Sociology and Director of the Center for Japanese Studies at the University of Michigan, presented a thorough picture of the causes of populism around the world and pinpointed how Japan is different. Whereas economic insecurity, threats to national sovereignty, and a desire for cultural autonomy have spurned populism elsewhere, those in Japan tend to hold more of a globalist view, believing international trade and engagement with international organizations like the United Nations to be in the best interest of the country. Immigration has also been relatively limited, and Japan’s mainstream culture has been largely unchallenged by minority groups.

Masayuki Tadokoro, Professor of International Relations at Keio University, suggested that Japan did flirt with populism when it elected the opposition Democratic Party of Japan in 2009, challenging the long-ruling LDP for a brief three years in power. But overall, Japan seems unlikely to wholeheartedly commit to populism as it lacks the sort of divisive political issues that cleave American voters, such as the big government vs. small government debate. He suggested that one possible exception might be the particularly controversial issue of Japan’s security arrangement with the US, he said. He also noted the “ticking time bomb” of Japan’s mounting public debt and suggested that a crisis caused by poor decision-making could pave the way for populists to take the stage.

Wrapping up the panel discussion, Visiting Scholar Amiko Nobori and Columbia Professor Emeritus Gerald Curtis provided final commentary. Professor Curtis concluded with the analysis that, while “demonstrated incompetence,” such as a public debt crisis or an ineffective response to the novel Coronavirus outbreak could whet appetites for populism in the future, Japan’s notable cultural aversion to risk make it unlikely that populism will rise to the level of threatening state institutions.

“All the evidence would suggest that what you see is what you’re going to get,” Curtis said.

This event was organized by Professor Takako Hikotani with support from the Weatherhead East Asian Institute, the Suntory Foundation, and the School of International and Public Affairs. 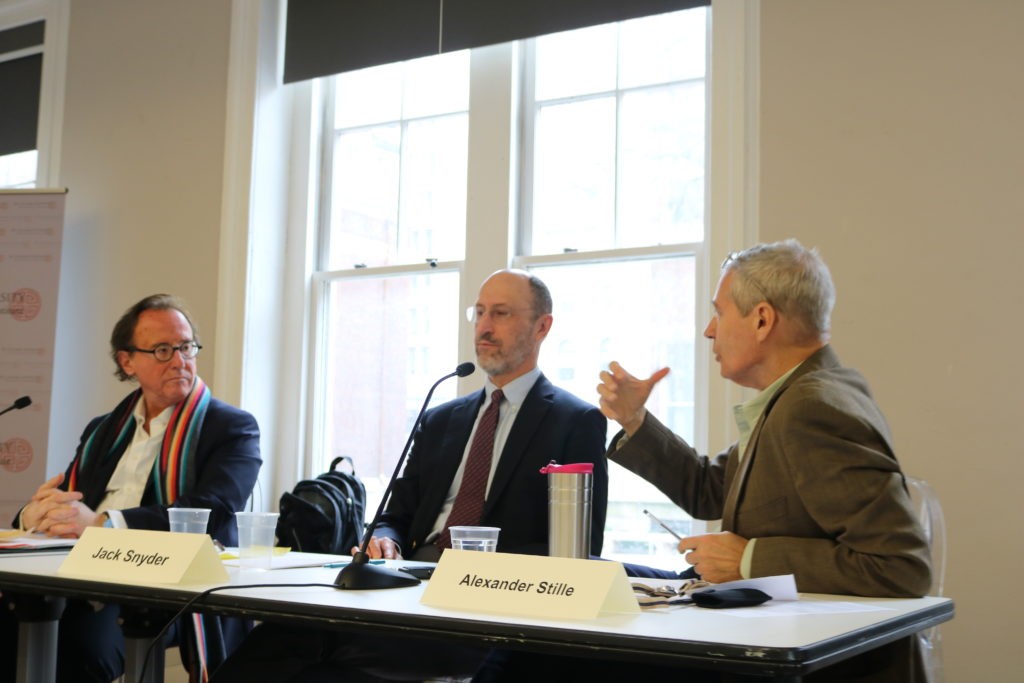 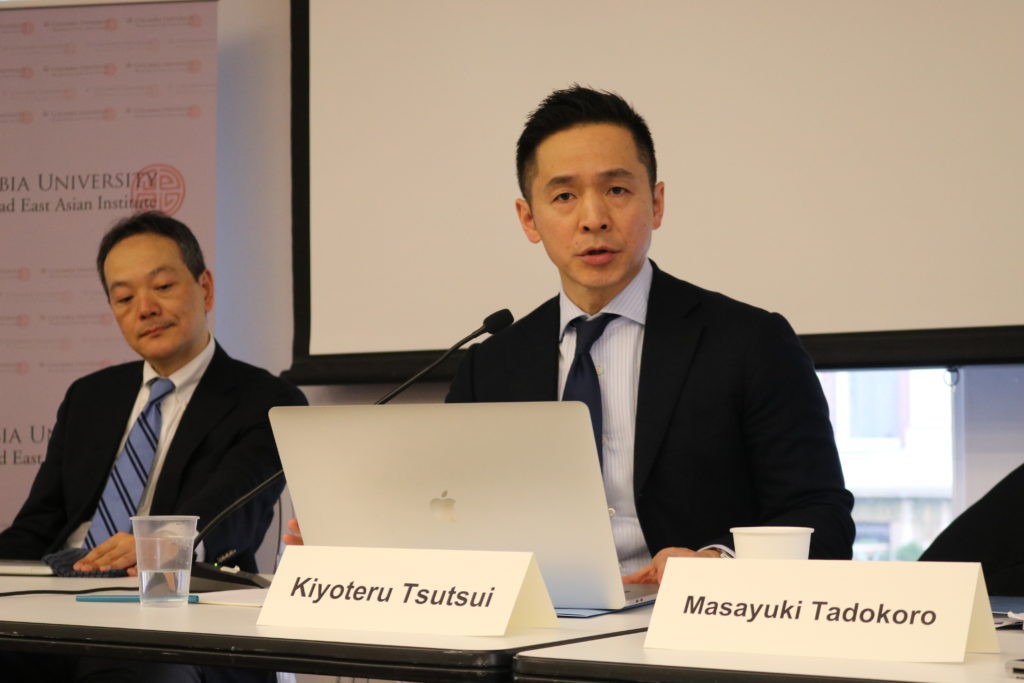 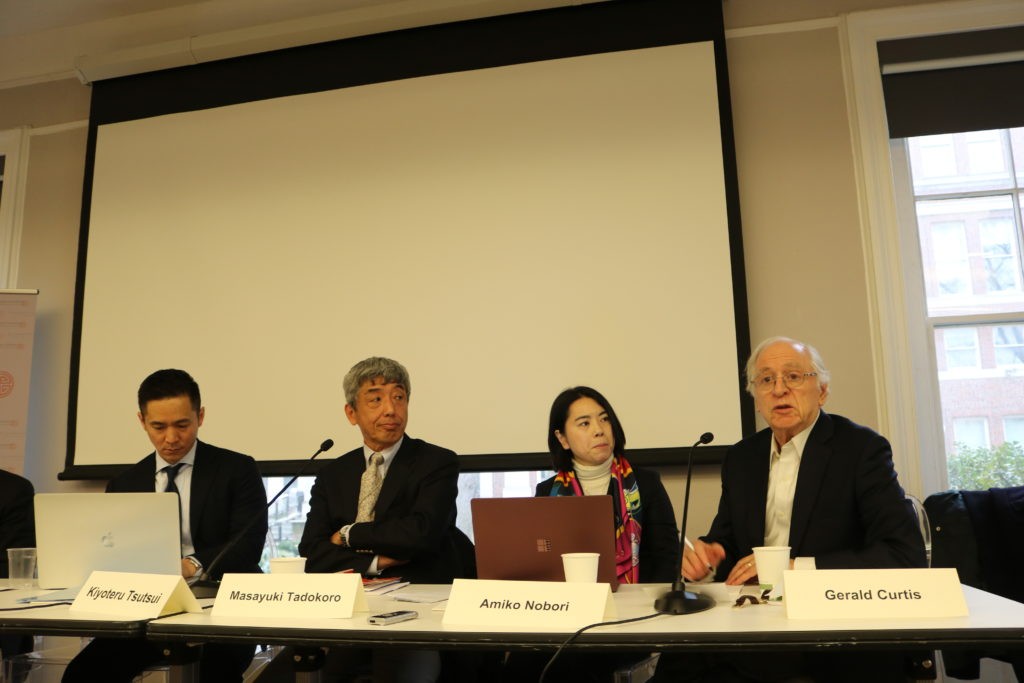