More than 40 years have elapsed since the end of the Vietnam War, but many in the US still view the country of Vietnam through the lens of war. “Vietnam” has long been synonymous with the conflict itself: an event that spanned two decades and exists today as a chapter in American history.

But there is so much more to Vietnam: an emerging market, a cultivation ground for the arts, a diverse and thriving diasporic community, and a country worth understanding with a unique history of its own. To foster much-needed knowledge about Vietnam and its many facets, Columbia launched a new Vietnamese Studies initiative this year with the support of the Weatherhead East Asian Institute (WEAI).

“Vietnam seems to be at an important crossroads,” said Lien-Hang Nguyen, Dorothy Borg Associate Professor in the History of the United States and East Asia, and a cofounder of the new  Vietnamese Studies initiative at Columbia. The choice of Vietnam as host of the recent diplomatic summit between US President Donald Trump and North Korean Chairman Kim Jong Un is just one example demonstrating the nation’s global position, and the need to reframe our understanding of Vietnam beyond the Vietnam War.

Without a deeper understanding of the country and its history, “you would be missing a myriad of very interesting ways to understand and track this development,” Nguyen said.

Through its new Vietnamese Studies initiative, Columbia and WEAI aim to expand the common understanding of Vietnam beyond the “very cursory, shallow understanding of Vietnam’s position regionally and globally” that has come from a field dominated by war studies “by going deeper into the past, deeper in ways to understand [Vietnam’s] important position as a bridge or gateway”  between regions, Nguyen explained.

China, Japan, and Korea have dominated East Asian studies, leaving Vietnam most often to the field of Southeast Asian studies. Columbia’s Vietnamese Studies initiative, however, challenges the notion that Vietnam can be simply categorized as part of one region rather than another, and highlights its unique position as a hinge or bridge between East and Southeast Asia.

According to John Phan, Assistant Professor of Vietnamese Studies in Columbia’s East Asian Languages and Cultures Department, “If you try to define East Asia by any means—like a shared script, a shared cultural history, a shared philosophy, a shared educational system —Vietnam unquestionably belongs in East Asia. At the same time, if you look at the history…you look at the relationship between especially Mainland Southeast Asia…and the Vietnamese kingdom and states, it’s unquestionable that Vietnam is part of the Southeast Asian arena.”

Phan, who helms the new initiative with Nguyen, suggested that attempts to pigeonhole Vietnam as part of a certain region or within a certain discipline have made the thorough study of Vietnam both a necessity and an opportunity. “Vietnam is perfect as a lens for criticizing the kinds of constraining ideas that have hampered research into East Asia and Southeast Asia, as well as the disciplines focused on those regions—historical disciplines, literary disciplines, policy and social scientific disciplines,” he said.

“Having Vietnam recontextualized into this broader network does a lot of good things for East Asian Studies, for the study of China, Japan, Korea throughout…that also has this feedback into Vietnamese studies,” Phan explained. But despite the value of studying Vietnam, existing Vietnamese studies programs across the US have been struggling to receive the institutional support they need to be sustainable, an unfortunate and ironic outcome considering “Vietnam’s growing importance in global life,” he noted.

“Vietnam’s academy has boomed. [The country] has emerged onto the global stage economically, particularly, but also politically as an increasingly important hinge between the ASEAN nations and China,” Phan said. “Also, artistically, the film industry has been booming. The fashion industry…and the culinary…All of that is happening right now and it is unprecedented since the war.” Columbia’s initiative, he said, “is particularly important for filling this moment.”

“Without the wider community that exists here at Weatherhead, I don’t think Vietnamese Studies— the initiative we’ve established—would be half as good,” said Nguyen, citing the foundation of research built up by Institute faculty members. “We really pull from their expertise both in terms of connections to Vietnam but also how they have built and sustained Japanese Studies, Chinese Studies, Korean Studies, Tibetan Studies.”

Phan added that WEAI’s interdisciplinary and cross-regional approach “enriches” and “cross-fertilizes” the work of its members. “It’s in some ways ideal as a platform for a new program like Vietnamese Studies.”

Building on this momentum, Nguyen and Phan, with the backing of WEAI and cosponsors, have worked to organize a number of successful events for the initiative. A symposium last month, entitled “Vietnam and China in the Longue Durée,” drew an audience of some 130 registrants. Four panels of eminent scholars from Australia, Vietnam, China, Canada, and the US addressed the dynamic relationship between China and Vietnam from the imperial period to the contemporary during the two- -day event. The symposium was preceded by a talk on journalism and media in Vietnam—the first event in WEAI’s 70th anniversary “Reporting Asia” series. This month, the Institute supported a screening of the acclaimed film “Journey from the Fall” and a brown bag talk with its Vietnamese-American director, Ham Tran.

From a projected conference on pre-modern Vietnamese history to screenings and talks on Vietnam’s modern arts and society, exciting things appear to be in store for Columbia’s new Vietnamese Studies initiative. 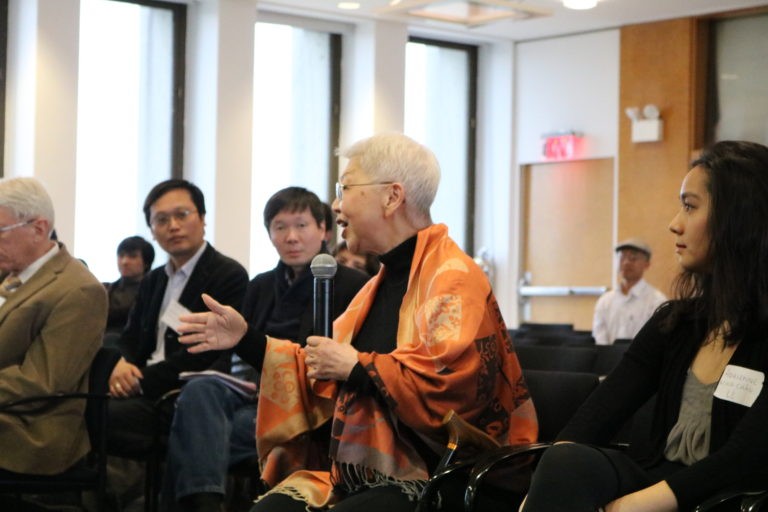 Participants ask questions at “Vietnam and China in the Longue Durée” 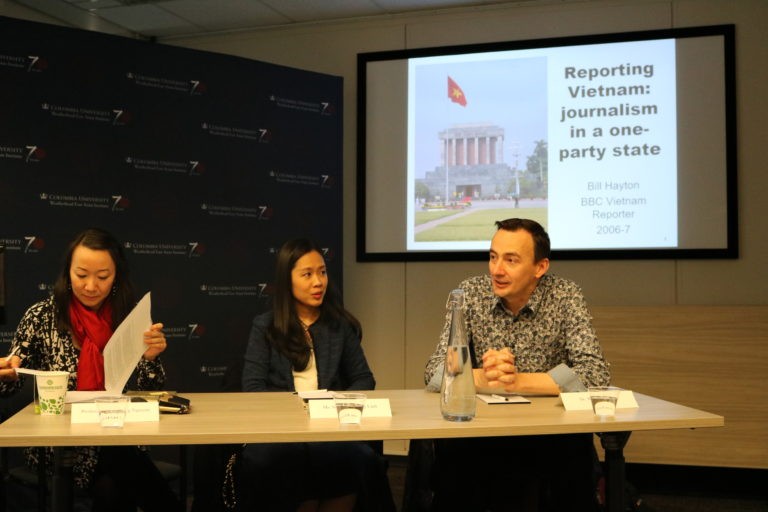 This article originally appeared in the March issue of the WEAI 70 Years newsletter.

The following events were organized as part of the Vietnamese Studies initiative during 2019:

February 22 – “Vietnam and China in the Longue Durée”

For a deeper dive into the value and impact of the Vietnamese Studies initiative at Columbia, read our interview with Professor Lien-Hang Nguyen about her research during a trip to Hanoi and Ho Chi Minh City here.